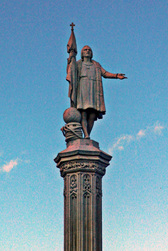 It's an awfully long way to fall from up here...
When I was really young, I remember my dad warning me not to put him on a pedestal. Everyone has faults, he explained to me, and if you put them up on a pedestal and pretend like they don't, eventually they're going to fall because they can't live up to that standard. And the higher the pedestal, the harder the fall. Of course, I didn't follow that advice, so years later when my parents divorced and my dad could no longer live up to the standards of the person I'd idealized him to be, he had a long way to fall.

My dad used to be a superhero to me, someone who I tried to imitate so I could be just like him when I grew up. To me, my dad was the man who could fight off any bad guy, who was kind to everyone he met and would always be there to hug me at night. As you may have guessed, that's not the case anymore. I can't go into details, but after the divorce, all of a sudden that perfect dad was saying hurtful things to my sister and me, rarely visiting, and at times acting downright extremely childish.

Thanks to my unrealistic expectations, I was angry with my dad for many years. I'd get angry at him for little things, like saying that mom needed to rake the leaves, instead of talking to him about what I was really upset about - I was upset that he'd let me down. I don't know if I even realized that was what I was upset about at the time, but it could have saved both of us a lot of hurting and arguing if I had just been able to talk to him about what was at the root of my anger. Instead, I felt angry and sad and hurt and abandoned and betrayed all at the same time and I set myself up for pain waiting for him to redeem himself, even while setting my standards too high for him to do so.

Why am I saying all of this? Because I want you to learn from my mistakes. This isn't something that just happens with my dad, or even dads in general. We do this to all our parents, at least at first. When we're little, our parents are the ones our worlds revolve around; they're almost like gods to us, in a way. But parents are just as human as we are, and full of faults. They may be our parents, but that doesn't keep them from making huge mistakes. Expecting more out of them is just setting them up for failure, which hurts you and isn't fair to them.

Odds are that your parent has already fallen from their pedestal, so if my advice is coming too late, why am I still giving it to you? For one thing, looking back it will probably explain a lot, especially if you felt betrayed by the divorce. It helps, too, to shift your view of the divorce. All of a sudden your parent goes from being someone who ditched your family for a fling to someone who just monumentally screwed up in one area of their life and (though not all will) who has the potential to redeem themselves given the chance, particularly if you make your expectations a bit more realistic.

When you're angry with your parent, you may want to try reminding yourself that they're human, too. We hold our parents toa different standard than we do other people, and maybe it's time to reconsider that standard. Whether it's anger issues, alcoholism, or wandering eyes, our parents have their own demons they're fighting, many of which were often given to them by their parents. For me, recognizing that fact helped with the grieving process. I call it a grieving process because you are grieving for the parent that you thought/wished you had. Now it's time to recognize that idealized parent never really existed and get to know the parent that you do have. They still love you, and, despite their faults, they're the same person you've known all along. The only difference is that now you're seeing them without illusions.

Recognizing and fighting against unrealistic expectations can help you going forward, too. For example, I know that if my dad and my sister and I are ever all together, the odds are that visit isn't going to go very well. I also know that my dad is almost always going to be at least half an hour late for any meeting with us (despite the fact that he's always punctual for work). As a result, I take preventative measures. For one thing, I try to mostly see my dad without my sister. It's not my sister's fault; it's just a hazard of having all three of us together at once, and I know the visit is less likely to end in tears and hurt feelings if there are only two of us together at a time. I also always run late for our visits myself so that I won't feel upset when my dad's late. Lately he's started to actually be on time for our visits and now I'm the late one!

You may wish to think about your time with your parents and see if there's any area where you're setting yourself up to get hurt. For example, if your mom never shows up for visits even though she says she will, you may want to not get your hopes up too high when she says she's coming to see you. If history's anything to go on, the odds are against her actually coming. That said, I'm not saying that you shouldn't hope; hope is what keeps us going even through the toughest times. Just keep your expectations realistic. So, in the example, you might tell your mom that you'd love for her to come visit, but if she can't make it then the two of you can Skype instead.

I still put my dad on a pedestal, but now it's a lot shorter, and there are cushions around the bottom to soften a fall. I haven't yet succeeded in getting rid of the pedestal completely. It's hard, especially since at times he's the amazing dad I used to idealize. Some days he'll say something hurtful, but then the next week he'll come to an event with me and just be the coolest, most insightful guy I've ever met and who all of my friends love. If I expected that out of him every visit, though, I'd be setting him up to fall all over again.

Just because I'm still struggling with this myself doesn't mean it's not the right thing to do; it just means that's it's really hard. Even if you can't succeed completely, just being aware of your expectations when they become unrealistic will help you better understand your parent and hopefully help improve your relationship going forward.


I'd like to dedicate this article to my dad. Even though our relationship isn't always the best, he's still there, and he's still trying. While I realize he has demons, I respect him all the more for continuing to fight them. I love you, Dad.