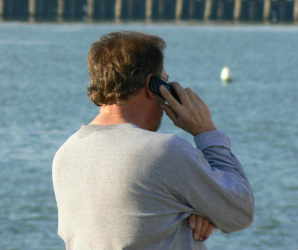 I've emphasized that you should stay in touch with your children after the divorce, but if you're a non custodial parent, that's not an easy task. Here are some tips, not only on ways to keep in touch, but what to do (and not to do) when you're talking.


Make it a routine of calling:
Maybe every day as you're driving home from work you call, or on your way to exercise or go grocery shopping. It doesn't really matter what it is, but the important thing is having a cue that reminds you to call your child. Soon it will be a tradition, and you won't need that cue any longer, but in the meanwhile it will help you stay in touch with your child.

Set up a visiting schedule - and keep it:
My dad, according to the courts, got my sister and I every other weekend. Unfortunately, he didn't even use half that many - it got to the point where my mom was praying he would take us so she could get a break. Visits were short, scheduled randomly, always started late, and were on occasion cancelled after five minutes out the door. Why am I saying this? Not in judgment of my dad, but as a warning for you. We notice these things and, whether they're true or not, they send a message. Short, rare visits send the message "I don't want to be around you." Visits cut short partway through say "If you make me upset, I can leave you." Coming consistently late tells your child "You don't matter to me." It doesn't matter whether you mean it, or not - I happen to know my dad loves me very much, would never abandon me, and enjoys being around me. He was just going through a difficult adjustment post-divorce (just as I was), and seeing me was a reminder of the divorce and his pain, feelings likely shared by many non-custodial parents. However, your actions speak louder than words, and that's what we're judging you by.

What you say matters:
I realize I just said actions speak louder than words, but that does not mean words are without their impact. This may seem as though it goes without saying, but do not use curse words when you're angry with your child, and do not compare us to our other parent. While we may love our parent, we're well aware that you don't and to use their name as an insult to us is low at best, cruel at worst.

Stay in touch, even after fights:
Especially after an emotional event like divorce, an occasional disagreement with your child is inevitable, and after you and your child have argued, the last thing you may want to do is talk to them. To some degree, it may be a good idea to wait, too. Give it a day, and calm down before you pick up the phone. That said, you will have to pick up the phone. If you realize that you had a part to play in the disagreement, apologize - and don't expect forgiveness right away - but do not apologize just so that your child apologizes in turn. The important thing is to keep in touch even after you've fought. If you give your child the silent treatment, you're sending the message I mentioned earlier, "If you make me upset, I can leave you." And neither of you want that.

Keep it simple:
We're still the same kids that you had before the divorce - if we didn't need to make a big deal of hanging out then, we don't need to do so now. So skip the fancy restaurants, the beach, and the amusement parks. All we want is you. I can tell you my favorite thing to do with my dad is just to go to his house and read and watch some television with him, although I'm still trying to convince him of that. Spending time together is far more important than how that time is spent.